How to Reduce the Bugginess of YouTube Player (Firefox - desktop)

The method with pink background below won't do anything. YouTube (Google Video) has updated (enhanced) their system, back and front.
Nherefour, just use the latest Firefox or Chrome, or update each of them.

The post below is mostly obsolete, but updated on some parts.


It'll be super cool to read only if you're curious.
:) 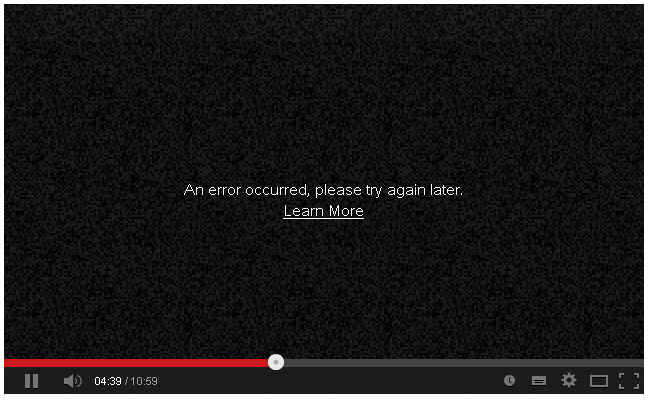 We all experienced that "error" once a while.

For your information, my internet connection is pretty much sufficient for streaming, ranged around 1 - 4.8 Mbps, near 125 - 600 KBps. I'm using a super neat wireless/mobile 3.5G modem here. So that I can bring it anywhere I want, like a stupidphone.
It's like, 500 MB file download would take a half - 1  hour to finish. Depends on the clouds and thunders, weather, per se. For streaming at other online places, it goes flawlessly.

Updated
Right, as you've noticed, what happened at YT after Google bought it:

I always use Firefox to do that. Google Chrome is "insane" though. But, I dunno, there's that "safe" feeling whenever streaming video using Firefox.


This is a list of things I do to make the streaming smoother on Firefox (which is obsolete, the newer methods are above):


Those methods are pretty much useful for me

I just realized that many people are not very pleased about the YT system changes.
But hey! Hm.

With those simple tweaks, hopefully you can stream any online videos peacefully using Firefox.

This recommendation by R Yuki at
productforums.google.com/forum/#!msg/youtube/1H0GSp21nmw/j86yh3_5hbEJ