Python and JavaScript: How to Create "Manual" Loop Function

In both programming languages, we can find many options for looping. But for this post, we will try to assemble a basic function which can be used to do a "manual" loop using increment. This surely can also use decrement. But for starter, let's use increment.

First, define the counter index and the limit outside the function as "global" variables.

Then make the function to increment the index. Rerun the function from within it (the function) if the counter hasn't reached the limit we defined.

Sounds really abstract, so let's put concept the coding in. What.

This is the screenshot from my Python console:

This is the JavaScript console output (on Chrome): 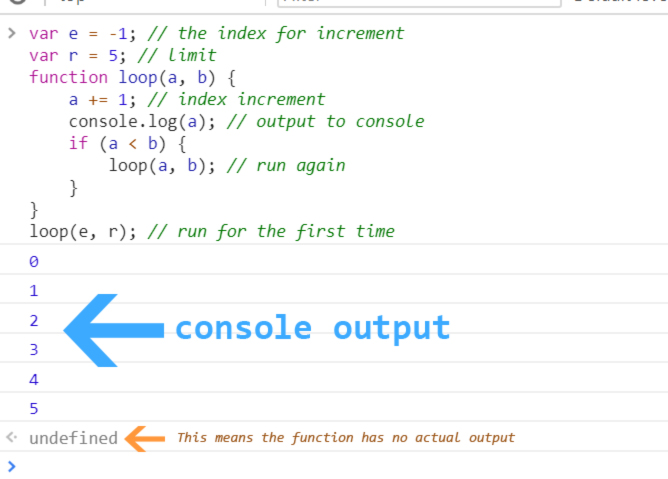 For the JavaScript, actually we don't have to supply the (global) variables (as arguments) to the function, because the variables are defined globally. Hm. But that WON'T WORK in Python. Well, it can definitely work with different typing, for instance, by not defining the parameters, the "using global stuffs without passing things", hm, so behehehe. Because Python is really something, so to make both consistent, I put the JavaScript coding for the function invocation (outside and inside) like the Python's version.

For your information, the difference between parameter and argument: parameter is a function variable used to define the input of that function. Argument is the actual value of the parameter (the actual input value).

With that knowledge, so the function named loop above has two parameters, a and b. And the supplied arguments are defined as (global) variables e and r (which hold the actual values). I hope that sentence earlier is understandable.

For the decrement (outputting 5 to 0 for example), you just need to switch the e into 6 (5 + 1), and the r to 0. Then the if part is reversed using "greater than" ( > ) operator.
Why "+ 1"? Because first step of that loop function is to decrement the index. Therefore, if we define 6 as the initial index, the very first output will be 5.

Well, you can test each one on your own machine.

Restart and Dynamically Modifying the Loop

In the examples above, to restart the loop, set the variable e (the initial index) to its initial state, whether -1 or 6. To make it "simpler", we can store the initial index value to a different variable, then assign that initial value (which is stored in a different variable or constant) to the index variable. After that re-initialization, call (invoke) again the loop function.

To modify both limits (upper and lower), similar like that restarting method. We can change either one or both dynamically depending what is the trigger (input/limit and the purpose of the loop).

We can also cancel (break) or abort the loop with if condition within the function. Again, depends on the trigger(s) we are observing.

To give an interval between consecutive loop execution, in Python, we can use time module. That is time.sleep(float_in_second). For example:

In JavaScript, we can use window.setTimeout(function..., integer_in_milliseconds). For example:

To make it efficient and "easily callable" for different purposes, you could combine all the custom additional stuffs then wrap it into one module (private) function. Uh, that's your own typing and staring at the ceiling time exercise.

And the last, the concept above can always be translated to other languages.